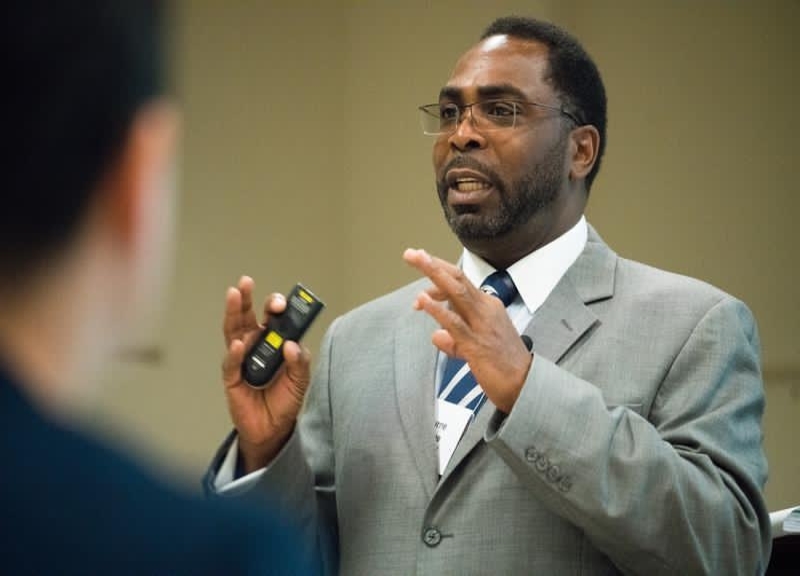 Dominican-born microbiologist and immunologist Dr Swinburne Augustine presenting at the Water Microbiology Conference of the University of North Carolina back in 2016.

Dominican-born microbiologist and immunologist Dr Swinburne Augustine has gone from humble beginnings in the small village of Delices to conducting research at the prestigious United States Environmental Protection Agency (EPA).

And this evening Augustine will be one of several individuals to be honoured at the 27th Caribbean American Heritage Awards (CARAH).

Loop Caribbean caught with Augustine for a Zoom interview.

At the start, he explained the award was being given to him in a personal capacity and he was also speaking in his personal capacity, and not as a representative of the US government or the EPA.

Asked when he learned about the award Augustine recalled it was Saturday and he was out running. On his way back home he got a phone call. When the caller confirmed his identity they told him they did some
research on him and they wanted to honour him with an award.

The caller was from the (Washington-based) Institute for Caribbean Studies (ICS) and explained they honour Caribbean Americans who are doing excellent work and of global significance via the CARAH. The caller asked if Augustine would like to accept the award for his work in the past and the research he is currently doing on COVID-19 - Augustine is researching testing via COVID-19 via a less invasive swab test.

Augustine accepted the offer and then he researched ICS and CARAH. He learned of people who had received the awards previously like actress Cicely Tyson and reggae matriarch and philanthropist Rita Marley.
"Coming from the Caribbean we look up to people like this and we try to emulate them, their standards of excellence."

When Augustine realised the magnitude of the award he said he became overwhelmed.

"It was quite an honour. I still can't digest it yet. It is a huge honour to receive something like this especially when it's from the Caribbean. When it's people from where I'm from. And coming from a small village in Dominica and working my way through this journey to get this award (it) is not just for me. I feel like it is a message to the youth of the Caribbean."

He said he stays in close contact with Caribbean and friends in Dominica, and he can tell some of the youth are getting discouraged. He explained by getting the award he now has a message for the youth: “You do not know where your journey will take you.”

"Just study, work hard. Even if you do things that you love you don't do it for money, fame or fortune. And you work in anonymity. And things like this (award will) happen. You just have to prepare."

Growing up in Dominica

And what was his childhood like in Dominica? He said he would not trade growing up in Dominica for anything in the world. He recalled they did not have good roads, running water or indoor plumbing.

He said back then it took a village to raise a child and everyone looked out for children. Augustine said currently there is a lot of talk about organic foods, healthy living and exercising but back then they did all these things without thinking about it.

"There were trees all over the place. Mangoes, coconuts, guavas. That's how we lived. I think it was the best a child could have growing up."

He said in terms of education most of their parents and grandparents did not have what Dominicans have today. Augustine was raised by his grandparents and he explained they raised all 13 grandchildren to allow for their own children to try and make their way through life. He also thanked his parents, uncles and aunts as well for their contribution to raising him.

His grandparents have since passed but his parents are alive.

"If there were two people that I would have loved to see what is happening now would be...my grandparents. But I am sure that as everyone in my family tell me 'don't worry, they are up there looking down. They know.'"

Augustine said when he was about nine-years-old he would spend every summer with his grandparents. He recalled one day when he was at his grandfather's garden in the mountains and his grandfather saw him shading from the sun under a tree. His grandfather told him in patois: "It looks like you don't like that kind of work." When Augustine did not respond his grandfather returned minutes later and said: "If you don't want to do agriculture and work in the hot sun then you must learn what's in those books that you have."

Augustine then began reading every book he saw.

But his journey to becoming a scientist would be crystallised many years later when he was a nurse in the US military. He recalled an instructor told him that he and his colleagues had to write a report on each patient in the hospital.

"But he didn't just want us to write they had diabetes or they had cancer or they had this or that."

The instructor told them to write the report on the patients and describe what they had at the molecular level, meaning they had to “go inside” each individual cell to describe the patient's condition.

"It was the first time that I had heard those words. And I stayed in the medical library at the hospital and started to read."

It was Augustine's investigation into cells that got him into science.

"It really intrigued me and I really wanted to do it."

You can watch the full video of the interview here:

In part two of the interview next week Augustine will chat about his work as microbiologist and biologist including his revolutionary work on a new COVID-19 test.