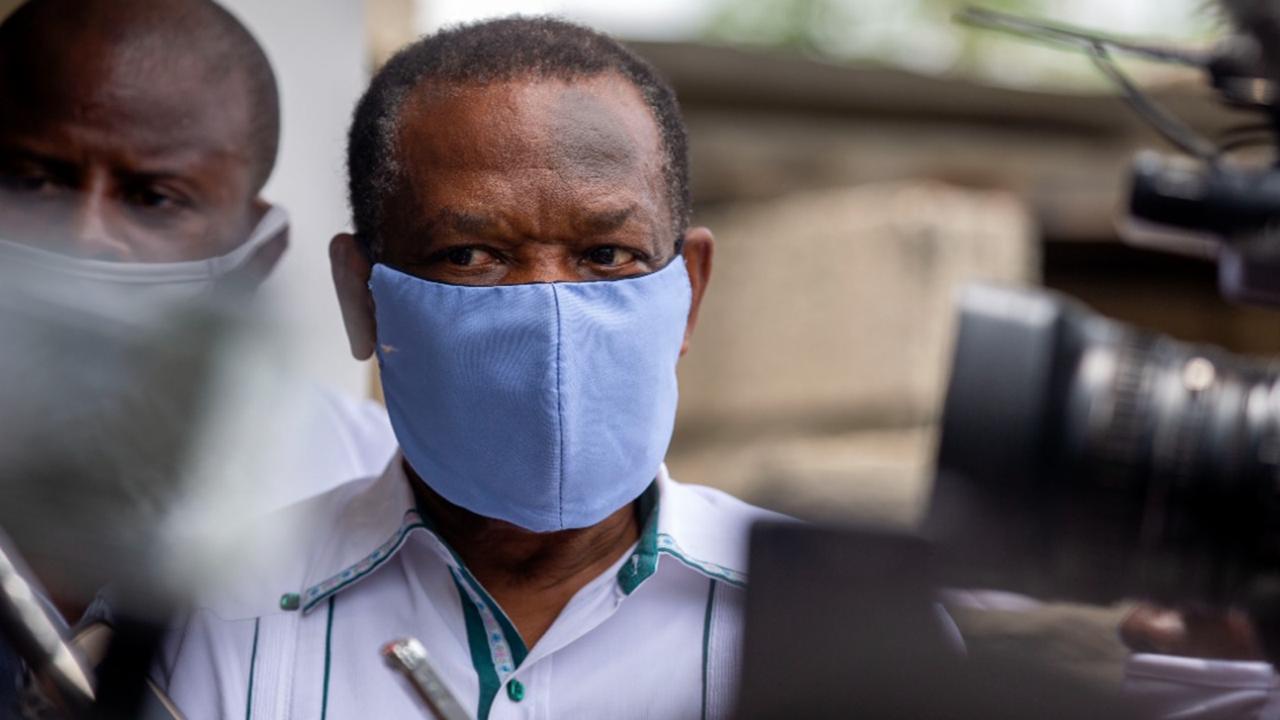 In this file photo dated Thursday, May 21, 2020, Yves Jean-Bart, president of the Haitian Football Federation, wearing a protective face mask, arrives for a court hearing regarding allegations that he abused female athletes at the country's national training centre, in Croix-des-Bouquets, Haiti. (AP Photo/Dieu Nalio Chery, FILE)

The FIFA ethics committee found Jean-Bart guilty of “having abused his position and sexually harassed and abused various female players, including minors” from 2014 until this year.

Jean-Bart has denied the allegations, which involve national team players, including minors. The local Haitian judicial system so far has refused to file charges, with a judge declaring last week there is no evidence.

The accusations were first revealed by British newspaper The Guardian in April.

Haiti follows Afghanistan in having its long-time soccer leader expelled from the sport by FIFA after players in the women’s national teams alleged widespread sexual abuse.

An appeal will be filed at the Court of Arbitration for Sport, a spokesman for Jean-Bart said in a statement.

The abuse is said to have happened at the country’s national training centre at Croix-des-Bouquets, which FIFA helped fund. It was known as “The Ranch.”

As the head of Haitian soccer since 2000, Jean-Bart “wielded huge power … and has high-level connections into the government, political and legal systems,” Human Rights Watch said.

Haitian state authorities have been urged by the advocacy group to investigate the allegations and protect the players, who also said they were intimidated and threatened.

“This is not a case of one bad apple," Human Rights Watch global initiatives director Minky Worden said ahead of the FIFA verdict. "Athletes have testified that many other officials in the Haitian Football Federation — officials responsible for their safety — either participated in sexual abuse or knew and turned a blind eye.”

FIFA said Friday that federation officials are accused of being “principals, accomplices or instigators” in the systematic abuse.

The union said Haitian soccer officials misused their power “to lure in young children, often from impoverished backgrounds, so they could groom, manipulate as well as sexually and emotionally abuse them.”

Jean-Bart had been “actually investigated and cleared” by the judicial system in Haiti, his spokesman said.

"FIFA failed to review actual evidence, which is why Dr Jean-Bart expects to be fully exonerated and reinstated after appealing to the Court of Arbitration for Sport,” Nierman said.

In the appeal case of Afghan soccer official Keramuddin Karim, CAS upheld FIFA’s punishment and said: “With his appalling acts, he had destroyed not only their careers but severely damaged their lives.”

Last week, an investigative judge in Haiti ruled that authorities found no evidence to press charges against Jean-Bart despite the allegations.

In the November 12 ruling made public this week, the judge noted that the government’s investigation included visits to the national training centre and interviews with certain players.

He wrote that none of the accusers identified any victims and that human rights organizations “shined for their absence” when asked to meet with officials as part of the investigation. He did not identify those organizations.

Marie-Yolène Gilles, executive director of the human rights group Fondasyon Je Kler, told The Associated Press that she was disappointed in the ruling and disagreed with it.

“If you have money, you’re able to get justice,” she said.

Justice officials in Croix-des-Bouquets could not be immediately reached for comment.

Gilles said victims have the right to appeal the ruling, but it wasn’t known yet if they planned to do so.

Since the allegations were revealed, FIFA has pledged to work on safeguarding players in an agreement with the United Nations Office on Drugs and Crime.

Kidnapped, killed: 100s protesting after the murder of Haitian student