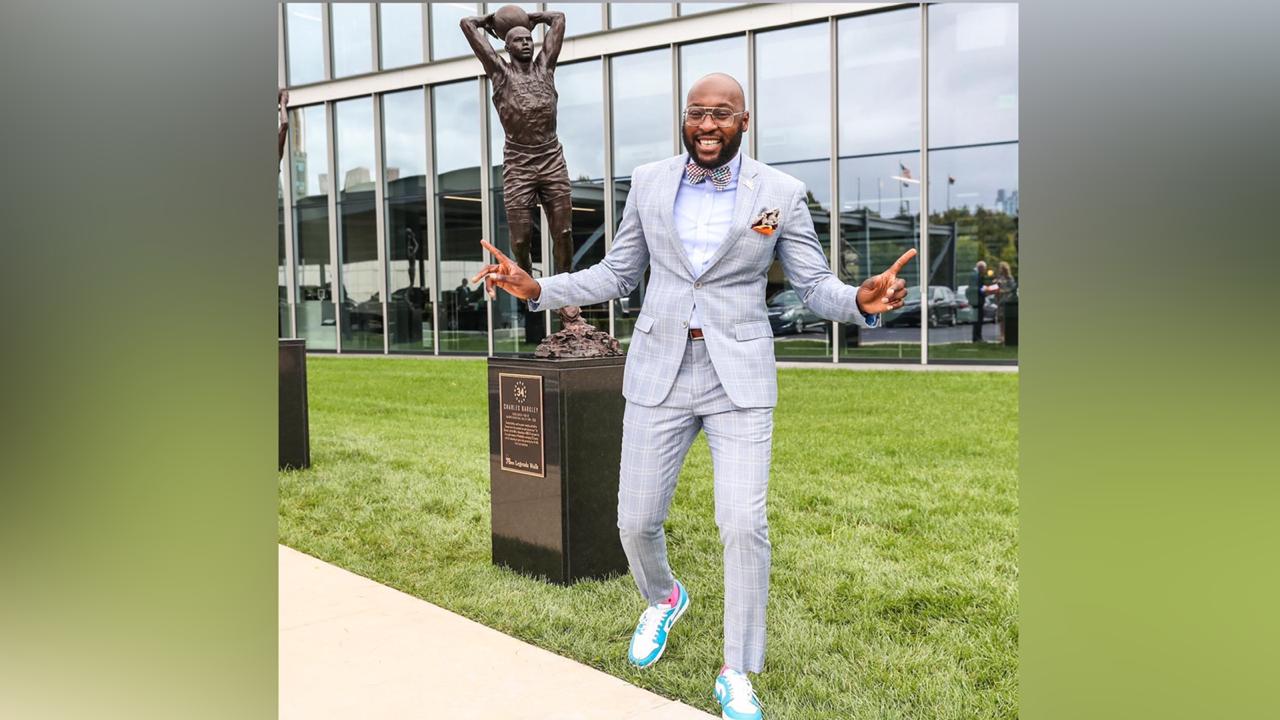 Like many boys growing up in the Caribbean, Desron Dorset was a huge fan of America's National Basketball Association (NBA).

Little did he know that years later he’d be inextricably linked to the game he’s long loved, through his involvement with Eastern Conference powerhouse team, the Philadelphia 76ers.

As the vice president of business development for the 76ers, the 33-year-old is instrumental in advancing the team's business interests.

Born and raised in Basseterre, St Kitts, he moved with his family to the United States when he was 14 years old.

In an exclusive interview with Loop Caribbean, Desron said he was first introduced to sports business while a student at Rutgers University, in New Jersey, where he was the student manager of the football team

“That gave me the opportunity to take a deeper look at sports business which pointed me in the direction of sports management as my predominant major. Coming out of that I actually wanted to be the athletics director at Rutgers. Post-graduation I had a plan, 20 years after graduation I’m going back to Rutgers to run that full athletic department,” he said.

As fate would have it, Desron's career took a different turn.

While pursuing his post-grad degree at Georgia State University, he worked with the athletics department. At the time they were launching their first-ever football programme. 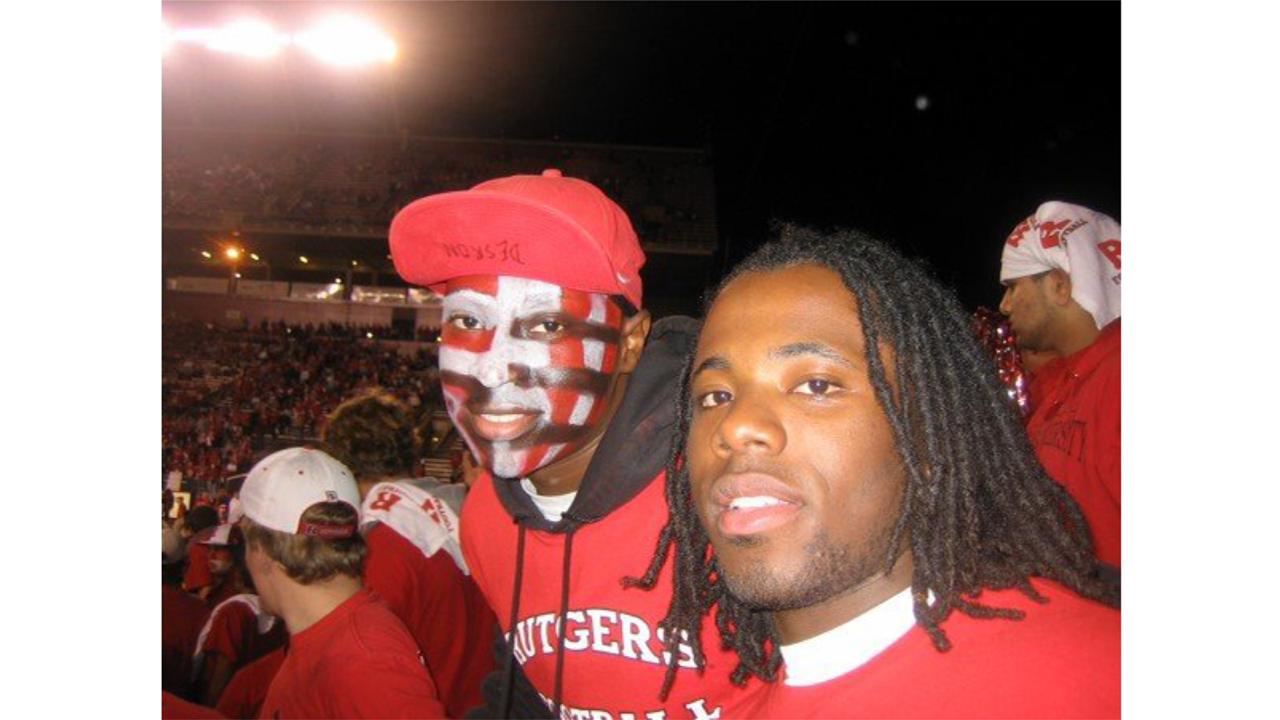 Desron during his time at Rutgers

Desron said he learnt a lot, but that experience made him realise that he no longer wanted to work in college athletics, but instead wanted to pursue a career in pro sports.

Before long he landed a job with the New York Red Bulls, a Major League soccer team in the US, which he said he thoroughly enjoyed.

Not only did it challenge him, but it also heightened his interest in and compelled him to burrow even deeper into the world of professional sports. Six years ago, the sports aficionado left what was a promising and fulfilling career to join the ranks of the Philadelphia 76ers.

He told Loop Caribbean it was a huge risk and a drastic pivot but at the time it just felt like right.

Desron said he is happy he followed his gut, as that move resulted in the best years of his life.

“I think when I started at the Philadelphia 76ers it was a bit ambiguous. We weren’t a good basketball team but we knew eventually we would be. We had a goal to make sure that the business side of the operation was what we call fifty-win ready. So I started just blocking and tackling, figuring out how to move the brand forward. I think every year that has passed over my six years we’ve come up with unique ways to move this brand forward.” 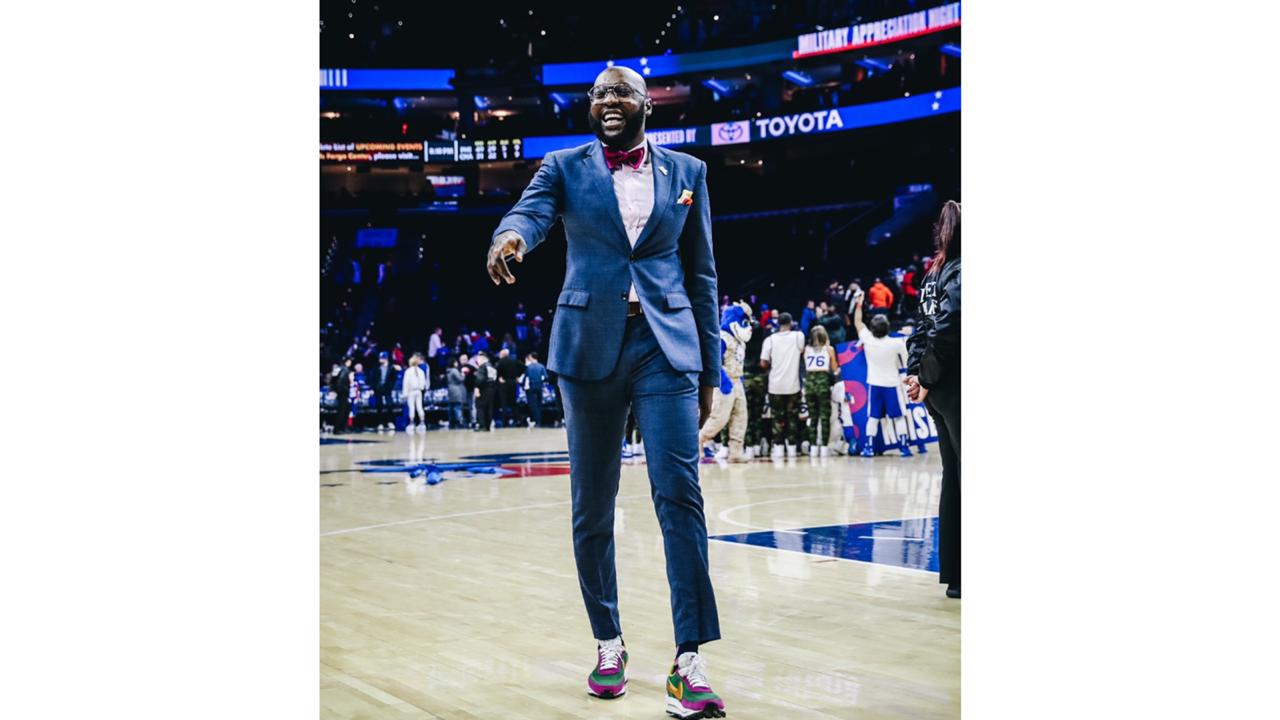 In the fall of 2019, the Philadelphia team launched the 76ers Crossover, which as Desron explained was their initial foray into lifestyle.

Desron said: “We look at the NBA as the hippest brand in the sports world and for us, we realised that Philadelphia as a city is made up of a lot of cool and great things. We think those things are art, food, music and fashion. So with the 76ers crossover, it's our crossover from basketball into lifestyle. In the fall of 2019, we launched that concept around what we call the 76ers Crossover Art Exhibition. It’s something we had never seen before, we built it from scratch and I think that one activation allowed us to launch a sort of non-basketball initiative which is going to take our brand from local to global. It’s something we’re proud of and we’re looking forward to the other executions around it. It’ll be great!”

The young executive said it was difficult to sell the idea of an art exhibition to a group of other executives who were focussed almost entirely on basketball.

He was happy to report, however, that the event surpassed even his expectations. 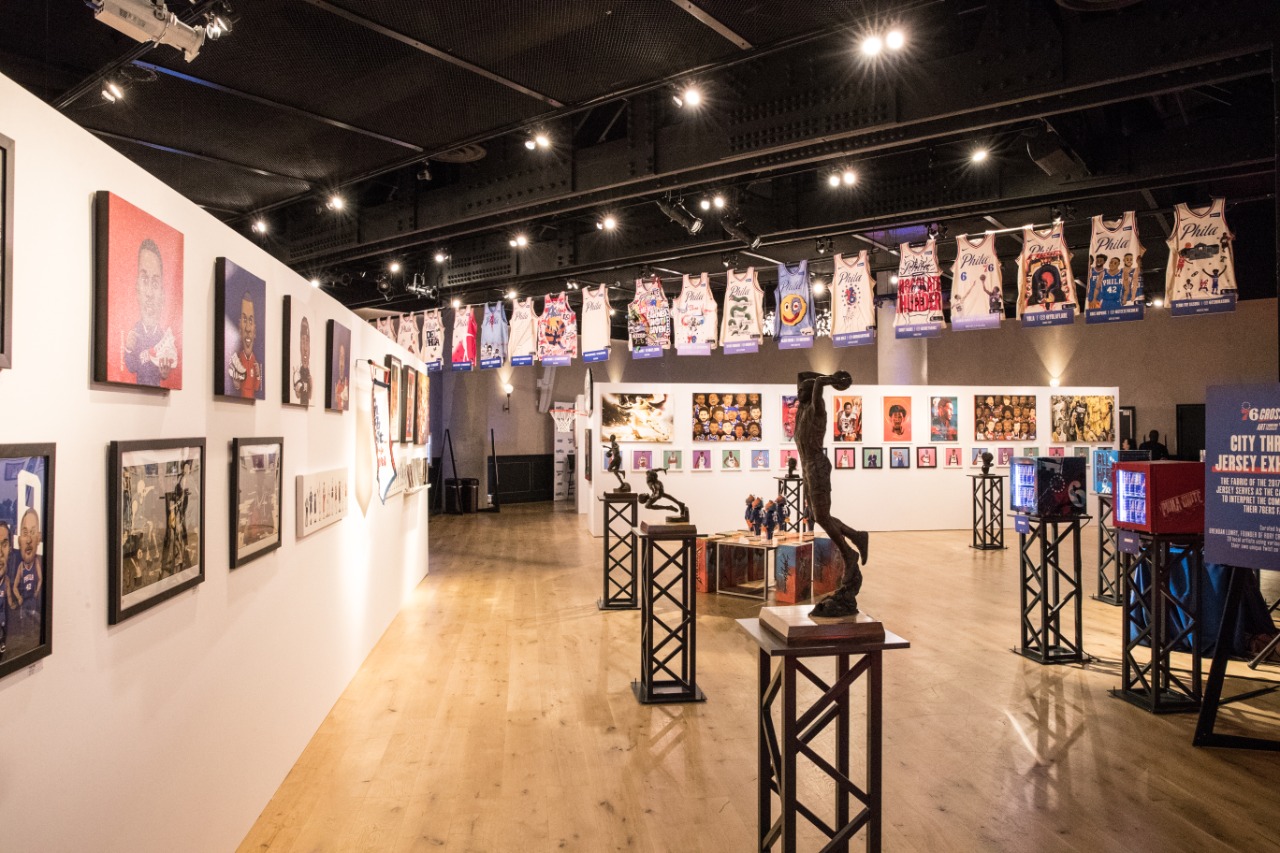 “Even when we were building this entire thing I felt like my job was on the line to make this event a success. Coming out of that I think when we built the recap… the event itself was awesome but the recap, when we showed them our position in the marketplace, how we elevated the brand, I think that was the thing that I would note to this day as my biggest accomplishment. Really taking a non-traditional activation and now making it a mainstay in the 76ers brand portfolio,” Desron added.

Despite his success in the professional world, Desron still thinks himself an island-boy at heart.

He misses the easy-going, laid-back camaraderie that he think is synonymous with island-life.

He said it’s a lot different from life in America.

“The American life, in general, is just so much work and so little vacation time, as much as someone may love their job… The island life does allow for you to have what we are still searching for to this day, work-life balance. Obviously, I’ve never worked in St Kitts but from what I’ve seen on my numerous times back, is that work-life balance is a really big thing. There’s no time in America when the entire country will shut down, you could talk about Christmas, their Independence Day, you could talk about other holidays, there's always something open. In St Kitts, when they shut down for carnival, oh yes, they shut down!”

Looking back at his journey, Desron said there’s not much he would do differently.

The NBA Executive recently celebrated yet another amazing feat, having been named one of the Philadelphia Business Journal's 2020 Minority Leaders.

Desron said that his journey has taught him that it's not about what you know, but who you know. Now armed with this knowledge, he said if given the opportunity, there are a few things he’d probably tackle a bit earlier.

With his name now well-known and some might even say revered in NBA boardrooms, Desron attributed his success to his Caribbean upbringing. He said: “My experiences in St Kitts fuelled my success in America.”

Having positioned himself as an unofficial ambassador for his home country, Desron said he capitalises on every opportunity to share the wonders of the twin-island federation with the people he comes into contact with.

He admits though, that it was a bit of a challenge when he first moved to the US at age 14 as his classmates often assumed that he was from the African continent or Jamaica. 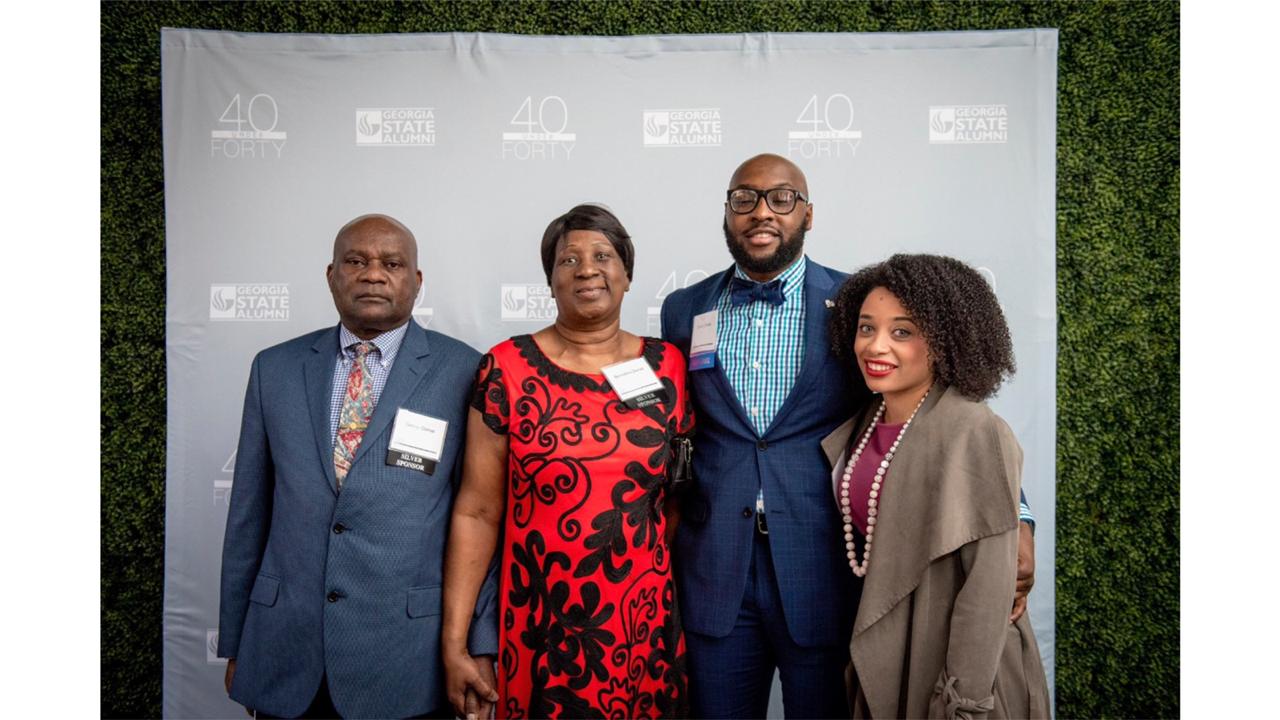 76ers exec. Desron Dorset with his wife and parents

No one, he said, seemed to know about the beautiful dot of an island that up until that point, had been his whole world.

“It was a really big learning curve for me to explain — in my accent — that I’m from St Kitts. I know it’s a tiny island… Even now, part of my challenge is when I introduce myself, I have to spend the first four minutes explaining where and what St Kitts is. I think as we jump over that hurdle with people in America, they’re like, ‘Oh my God that sounds amazing, it's paradise, I want to visit.’ I always take the opportunity to say, 'Hey if you’re planning your next vacation, check out St Kitts'.”

Desron told Loop Caribbean that there were countless moments he didn't think it possible but he can now say that he is living the American dream.

He said it's fun to be in a position that allows him to give back to the wider community.

The young executive credits his success in part to the unwavering support of his family who he says keeps him grounded. 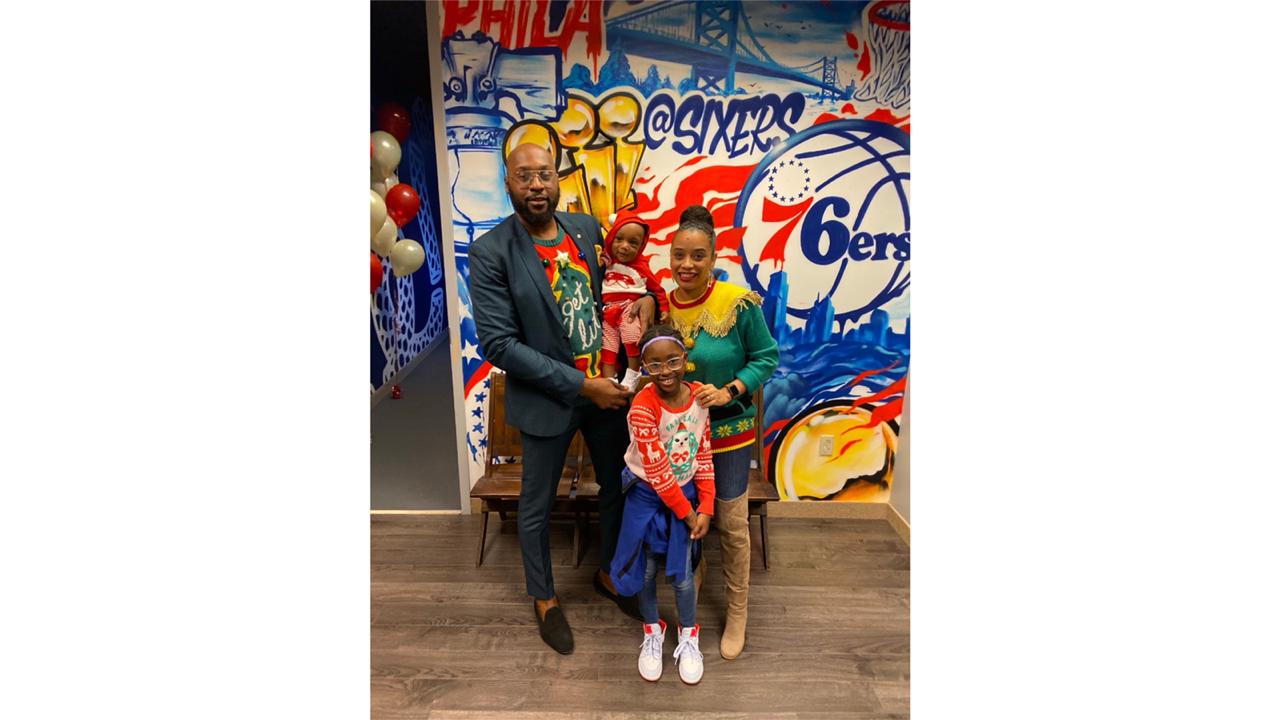 Desron Dorset with his family at a 76ers event

He said his life is a testament to what can be accomplished when one remains focussed and grounded in the pursuit of one's dreams.

To young people in the Caribbean, he said, "Work hard, trust the process and believe in yourself."

Game Changer: Tyrone's story of success in the face of remarkable odds

Game changers: Safia, she dared to dream and now she travels the world

Game Changers: Shari Petti on her journey as a filmmaker