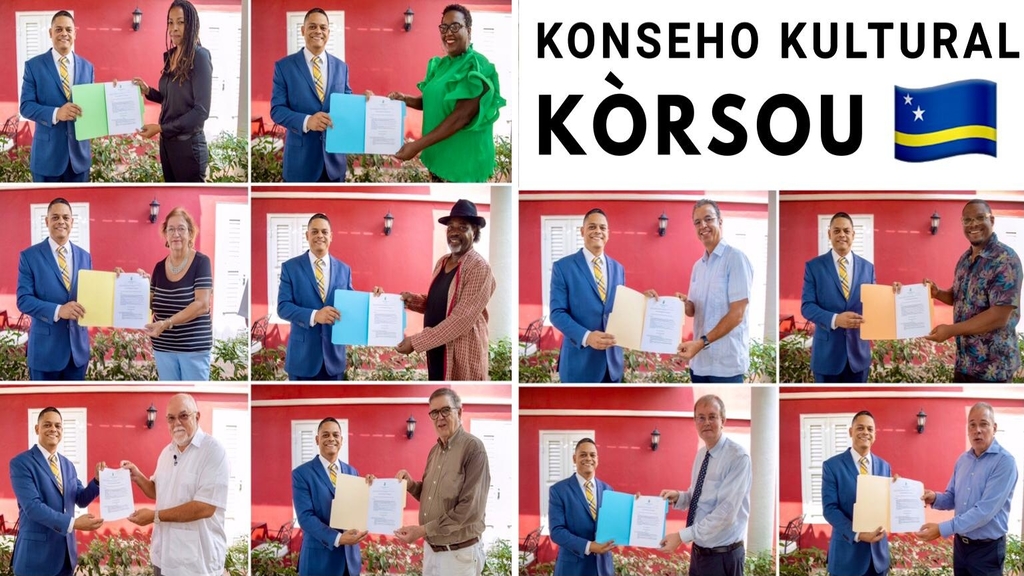 A composite photo of Curaçaoan Prime Minister Eugene Rhuggenath presenting instruments to the new members of the Cultural Advisory Council.

The Government of Curaçao has appointed a new Cultural Advisory Council.

In a release Thursday, the government reported the Council of Ministers in its meeting of October 7 agreed to appoint 10 members to the Cultural Advisory Council Curaçao (Konseho Kultural Kòrsou).

"The objective of this Cultural Advisory Council is to advise the Government in the broad field of culture in Curaçao. As professionals in the field, they will contribute as a broad cultural platform that maintains contact with representatives of the different cultural disciplines in the field."

The Curaçao Cultural Advisory Council was established in 1968 by the then Executive Council. In 1977 the name was changed to Konseho Kultural Kòrsou.

"Although advice has been issued in the past in the field of culture, the board has mainly dealt with the task of preparing an annual nomination for the prestigious Cola Debrot Prize, the culture prize of the Curaçao government. In order to contribute to a more structural cultural policy, the Konseho Kultural Kòrsou made a proposal to the Minister of Education, Science, Culture and Sport a few years ago to expand the tasks of the council. In this way, the latter can provide solicited and unsolicited independent advice to the Minister in the broad field of culture in Curaçao."

The Government agreed to this request in 2019.

The tasks of the Council as laid down by National Decree consist of: