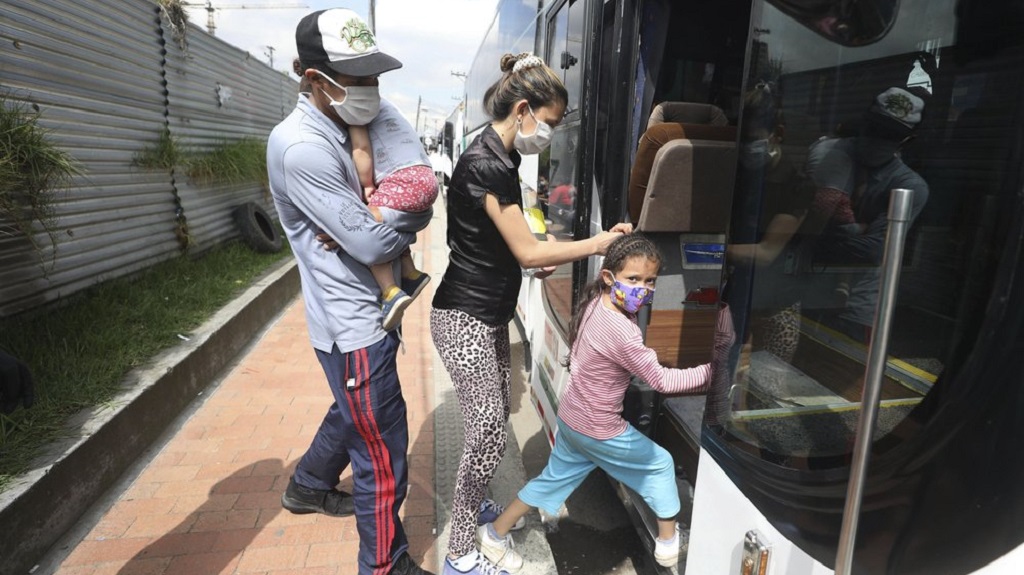 After fleeing Venezuela along with millions of others amid the country's gruelling humanitarian crisis, Misael Cocho made his way by bus to Peru — where he got odd jobs and sent money home monthly to support his mother and his 5-year-old son.

But just after Cocho landed his steadiest work so far in Lima, coronavirus cases skyrocketed. He lost his job, sold his TV to buy food and hasn't been able to wire money for months to Caracas to pay for food for the boy and Cocho's mother.

The pandemic's economic fallout left many Venezuelans abroad and the relatives back home who rely on them in a crisis. And as work disappears in countries like Peru and Colombia, humanitarian groups say many Venezuelans who fled hunger are now going hungry.

Cocho, 24, faces a dilemma: Should he stay in Peru in case the economy improves, or go back to Caracas where life is precarious but might not get worse?

"The truth is that this pandemic has really hit me hard," he said.

Venezuela's population peaked at 30 million in 2015, but 5 million alarmed at the country's economic implosion migrated elsewhere in South America and to the US and Europe, according to the U.N.'s International Organization for Migration. Most who stayed behind get by on a minimum wage that's the equivalent of about $2 a month.

About half of the Venezuelans who emigrated to other South American countries are so-called "informal" sector workers — labourers, vendors, street performers and waiters, estimated Provash Budden, regional Americas director for the Mercy Corps humanitarian aid group.

Those jobs were hit hard by the virus' economic impact and there are few if any social safety nets to help the people who had them.

But he was laid off as the coronavirus spread. Peru has about 65,000 confirmed cases and, with more than 1,800 deaths, the second highest Latin American death count after Brazil, where more than 10,000 have died.

He sleeps on a mattress in a crowded home filled with Venezuelan migrants.

The landlord has let him skip the rent so far, but Cocho doesn't know how long the generosity will last.

"I've had no other choice but to sell the things I don't use in order to get by," he said.

Venezuela was once a wealthy nation sitting atop the world's largest reserves of oil.

But years of political confrontation, corruption and resource mismanagement by the socialist government left most Venezuelans with increasingly scarce water, electricity, gasoline and inadequate medical care.

Of the 15% of Venezuelans who abandoned their country, about 1.8 million went to neighbouring Colombia. Others headed to Brazil, Ecuador and Peru.

Those who found more success than informal sector workers started businesses and enrolled their children in schools.

But the coronavirus abruptly halted many migrants' aspirations and limited their ability to help economically hurting relatives back home.

"Like everyone here, my mission in Peru has been to help my family in Venezuela," Cocho said.

Because of Colombia's strict stay-at-home order for the pandemic, many migrants in Bogota must break the law to go outside and make money to buy food or stay behind closed doors and go hungry, aid groups said.

"All of a sudden, they've become invisible, locked away behind closed doors," said Marianne Manjivar, director for Colombia and Venezuela for the International Rescue Committee humanitarian aid group.

About 20,000 Venezuelans went home since early March, according to Colombia's government, which has paid for about 396 bus trips to take them to the Venezuelan border.

Yonaiker García, 22, was making a decent living after leaving Venezuela for Bogota — earning $500 monthly as a graphic artist until the pandemic hit and he became jobless and homeless.

"They kicked us out onto the street," García said on the outskirts of Bogota late last month while taking part in a protest to try to persuade the Colombian government to pay for more buses to the border.

Venezuelans abroad in South America are at high risk of infection because they must work in public or remain cooped up in increasingly crowded apartments, said Budden, of Mercy Corps.

"From a public health point of view, it's a recipe for disaster," he said.

Some who arrived at the small city of San Cristobal near the border with Colombia last month were held for two weeks in a sports complex under military guard, in tight quarters that made social distancing difficult.

An Associated Press journalist heard those inside shouting demands to be allowed to go home.

The returning migrants find communities with shuttered hospitals because thousands of doctors and nurses left the country.

Venezuela has so far reported only 367 cases of coronavirus and 10 COVID-19 deaths. Experts believe the actual number is much higher because so little testing has been done and the type of testing does not reveal recent infections.

In Caracas, Cocho's mother, Maylin Pérez, 48, says the potential spread of the virus weighs on her heavily.

She lives up several flights of stairs in a spartan, three-room apartment with old photos of her son on the walls.

So she knits colourful face masks to barter for extras besides the lentils and rice from a monthly, government subsidized box of food she usually eats with her grandson.

Pérez said the highlights of her days are the text messages from her son, who also calls every few days so the son can hear his father's voice.

She said she tries to convince Cocho he shouldn't worry about not sending money because she's more concerned about him getting infected.

"Take care of yourself," she said she tells him. "Your first priority is your health, your life."

Trump's cut in WHO funding will hurt Venezuelans, say US lawmakers