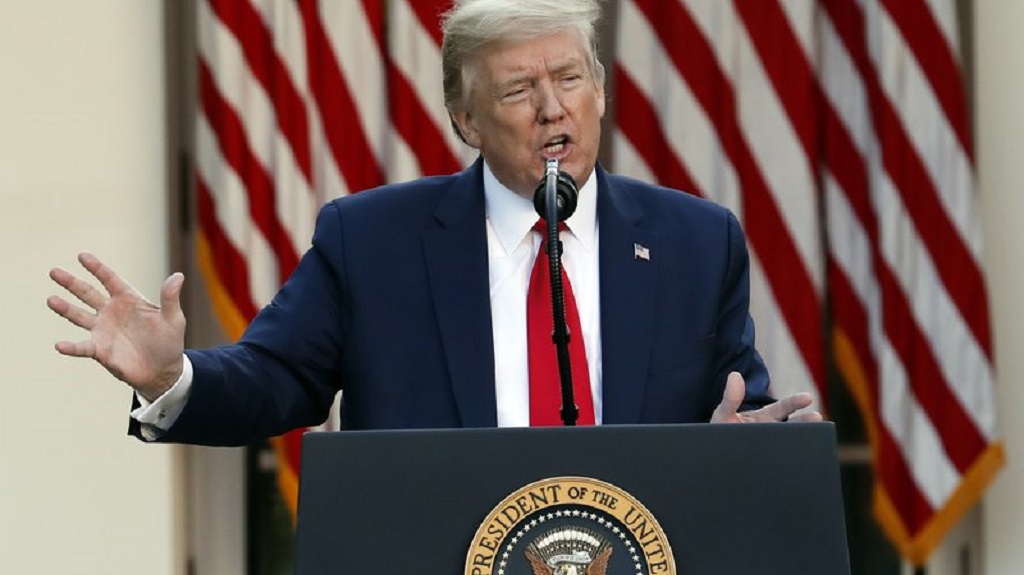 President Donald Trump speaks about the coronavirus in the Rose Garden of the White House, Monday, April 27, 2020, in Washington. Trump says states should “seriously consider” reopening their public schools before the end of the academic year, even though dozens already have said it would be unsafe for students to return until the summer or fall. (AP Photo/Alex Brandon)

President Donald Trump says states should "seriously consider" reopening their public schools before the end of the academic year, even though dozens already have said it would be unsafe for students to return until the summer or fall.

Trump made the comments Monday in a call with governors discussing how to reopen their economies, among other topics.

"Some of you might start thinking about school openings because a lot of people are wanting to have the school openings. It's not a big subject, young children have done very well in this disaster that we've all gone through," he said.

While addressing Vice President Mike Pence, Trump added that it's something "they can seriously consider, and maybe get going on."

None of the governors on the call responded to the suggestion, according to a recording obtained by The Associated Press.

Trump made the comments as the Centers for Disease Control and Prevention worked to finalize guidelines for reopening the economy. For schools, that included putting students' desks 6 feet (1.8 meters) apart, serving meals in the classroom instead of the cafeteria and closing playgrounds.

Reopening schools is considered key to getting the economy moving again. Without a safe place for kids, many parents would have difficulty returning to work.

But some education officials say opening schools quickly would bring major risk and little reward, especially since the end of the school year is approaching.

"Are they going to reopen for two weeks? Three weeks?" said Daniel Domenech, executive director of the American Association of School Administrators,

"It's not the right thing to do. Particularly when we're involving the safety and welfare of our students."

At a White House news conference Monday, Trump acknowledged that there's little time left in the school year, even as he said many states are thinking about getting kids back into the classroom.

"I think you'll see a lot of schools open up even if it's for a very short period of time," he said. "In terms of what this vicious virus goes after, young people seem to do very well.

Schools across the nation have closed during the coronavirus pandemic, and dozens of states have ordered their schools to remain closed through the rest of this academic year.

Only a few have publicly discussed earlier openings, including Montana, which says school districts can resume classroom instruction on May 7.

In many districts, officials have said it's still unclear whether students will be able to return to the classroom by next fall. And even if they do, many are planning for social distancing measures that could make school look radically different from the past.

Los Angeles Mayor Eric Garcetti said on CNN that it's "way too early" to reopen his city's schools, adding that "you don't get a lot of credit for moving too quickly to reopen."

Responding to Trump's comments, one of the nation's largest teachers unions said there's still much work to be done before schools can open safely.

The American Federation of Teachers said there needs to be better testing and tracking for the virus, and schools must have access to personal protective equipment.

"It's good the president understands that reopening society and the economy hinges on successfully and safely reopening schools," said Randi Weingarten, the union's president.

"But the question should not be whether we open schools, but how we do it safely. COVID-19 is a terrible virus that has already taken too many lives, and, in the absence of a vaccine, there is no magic wand or magic elixir as the president would have us believe."

If schools reopen too quickly and end up spreading the coronavirus, schools could be held legally liable, said Francisco Negrón, chief legal officer for the National School Boards Association.

And while coronavirus cases have been mild among US children, many schools have students with medical conditions that could make them vulnerable, he said.

In the CDC's draft guidelines for schools, the agency suggested a three-phase reopening process for schools in communities with "low levels of COVID-19 spread and those with confidence that the incidence of infection is genuinely low."

The guidance encourages schools to create isolation areas for students who develop symptoms. And if anyone with COVID-19 is found to have been in the building, it advises schools to shut down for one or two days to clean and disinfect.

Domenech, of the school administrators association, said the guidelines pose significant logistical hurdles. Trying to keep younger students 6 feet (1.8 metres) apart could prove to be impossible, he said, and many schools have so many students they would violate suggested limits on large gatherings.

Still, schools are looking for ways to limit student interaction as they reopen, including plans to bring only a portion of the students in at once.

Schools might bring half the students in for the morning, for example, and rotate in the other half for the afternoon. While they're at home, students could keep taking classes online, Domenech said.

"Everybody wants to have the kids back," he said. "We understand the impact that this has on the economy. You have working parents and they need their kids to be safe and in a school environment so they can go back to work. Sooner or later schools will have to reopen. The question is how."