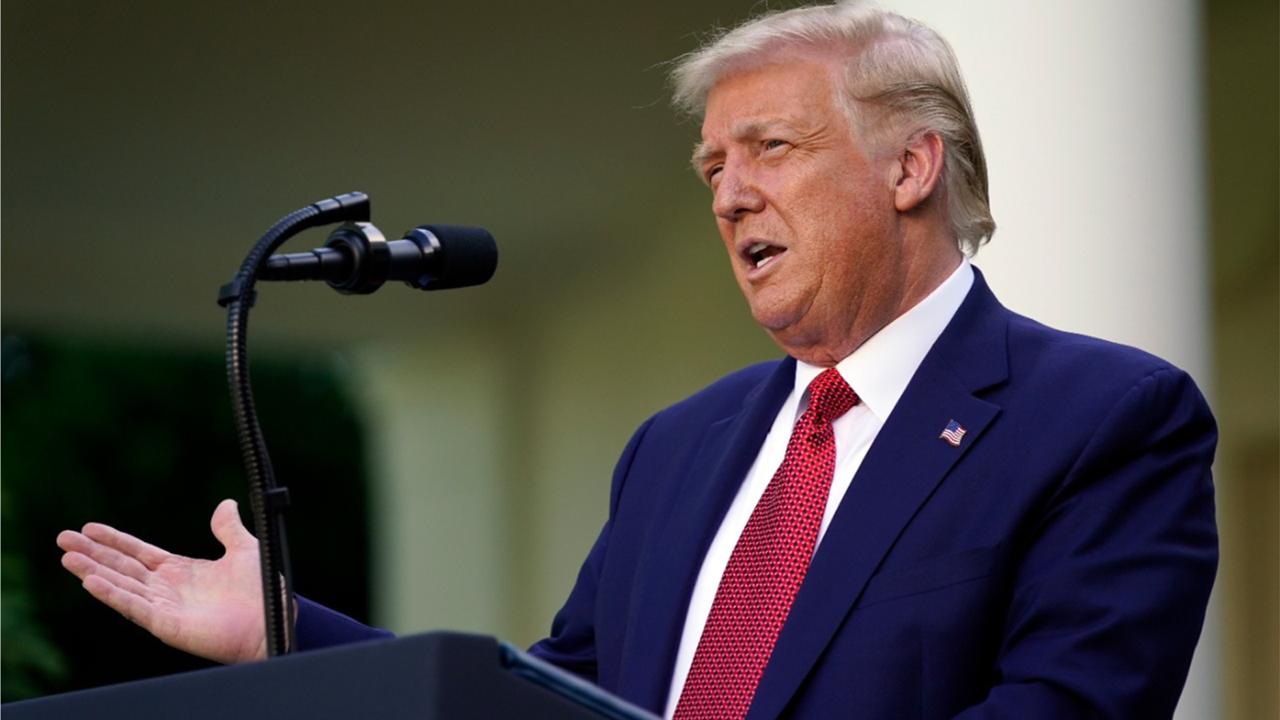 President Donald Trump speaks during a news conference in the Rose Garden of the White House, Tuesday, July 14, 2020, in Washington. (AP Photo/Evan Vucci)

President Donald Trump signed legislation and an executive order on Tuesday that he said will hold China accountable for its oppressive actions against the people of Hong Kong, then quickly shifted his policy speech into a political one, hurling broadsides against Democratic rival Joe Biden.

The legislation and order are part of the Trump administration's stepped-up offensive against China for what he calls the rising Asian superpower's exploitation of America and its effort to conceal details about the human-to-human transmission of the coronavirus from the world.

The almost daily administration attacks on Beijing come as Trump defends his own response to the virus, with cases surging in parts of the United States, and as he works ahead of the election to portray Biden as soft on China.

“So Joe Biden and President Obama freely allowed China to pillage our factories, plunder our communities and steal our most precious secrets,” Trump said, adding, “I’ve stopped it largely.”

Trump said that as vice president, Biden advocated for the Paris Agreement addressing climate change; Trump withdrew the U.S. from the accord. “It would have crushed American manufacturers while allowing China to pollute the atmosphere with impunity, yet one more gift from Biden to the Chinese Communist Party,” Trump said.

Trump talked up his own tough approach to Beijing, though he spent the early weeks of the pandemic praising Chinese President Xi Jinping. The two nations signed phase one of a trade deal, but since then, relations have soured and Trump told reporters in the Rose Garden that he has no interest in talking to Xi.

The legislation Trump signed into law targets police units that have cracked down on Hong Kong protesters as well as Chinese Communist Party officials responsible for imposing a new, strict national security law widely seen as chipping away at Hong Kong’s autonomy. The mandatory sanctions are also required to be imposed on banks that conduct business with the officials.

While he signed the bill into law, Trump issued a statement saying the administration would not view as binding certain sections of the law that the White House believes limit a president's powers to conduct foreign policy.

Lawmakers from both parties have urged Trump to take strong action in response to China’s new national security law that erodes the “one country, two systems” framework under which Britain handed Hong Kong over to China in 1997. Hong Kong is considered a special administrative region within China and has its own governing and economic systems.

“This law gives my administration powerful new tools to hold responsible the individuals and the entities involved in extinguishing Hong Kong's freedom,” Trump said. “Their freedom has been taken away. Their rights have been taken away, and with it goes to Hong Kong in my opinion because it will no longer be able to compete with free markets. A lot of people will be leaving Hong Kong, I suspect."

The executive order he signed did not appear to go beyond his administration’s previous determinations that Hong Kong is no longer eligible for preferential treatment from the United States. Trump said the order strikes those privileges but, in fact, the administration already has been in the process of eliminating them for nearly two months.

Secretary of State Mike Pompeo first made the determination in late May that China’s decision to impose a new national security law in Hong Kong meant the former British territory was no longer a democracy and so was no longer eligible for trade, commercial and other U.S. perks it had enjoyed.

Just three days later, when Trump announced the U.S. was withdrawing from the World Health Organization because of Chinese influence, he echoed Pompeo’s determination and instructed his administration to immediately begin eliminating the preferences, which it did.

In late June, the administration barred Hong Kong from importing U.S. weapons, saying its purchase of items that have both civilian and military applications would be subject to the same licensing requirements as mainland China.

Other actions in the works include suspending an extradition treaty with Hong Kong, something Australia has already done, as well as ending legal cooperation agreements, taxation accords and financial understandings that cover accounting rules for Chinese businesses that work in the U.S.

At the same time, the administration has pressed ahead with travel bans for Chinese, Hong Kong and communist party officials the U.S. believes are responsible for curtailing democracy in Hong Kong.

The administration has also gone after China by imposing travel bans on officials for repressing minorities in western China and hindering foreigners’ access to Tibet. On Monday, Pompeo announced that the U.S. had decided to reject outright virtually all Chinese maritime claims in the South China Sea, a determination that could lead to increased tensions in disputed, critical international shipping lanes.

China's new outbreak wanes as US calls for answers on virus

China sanctions US lawmakers for criticism