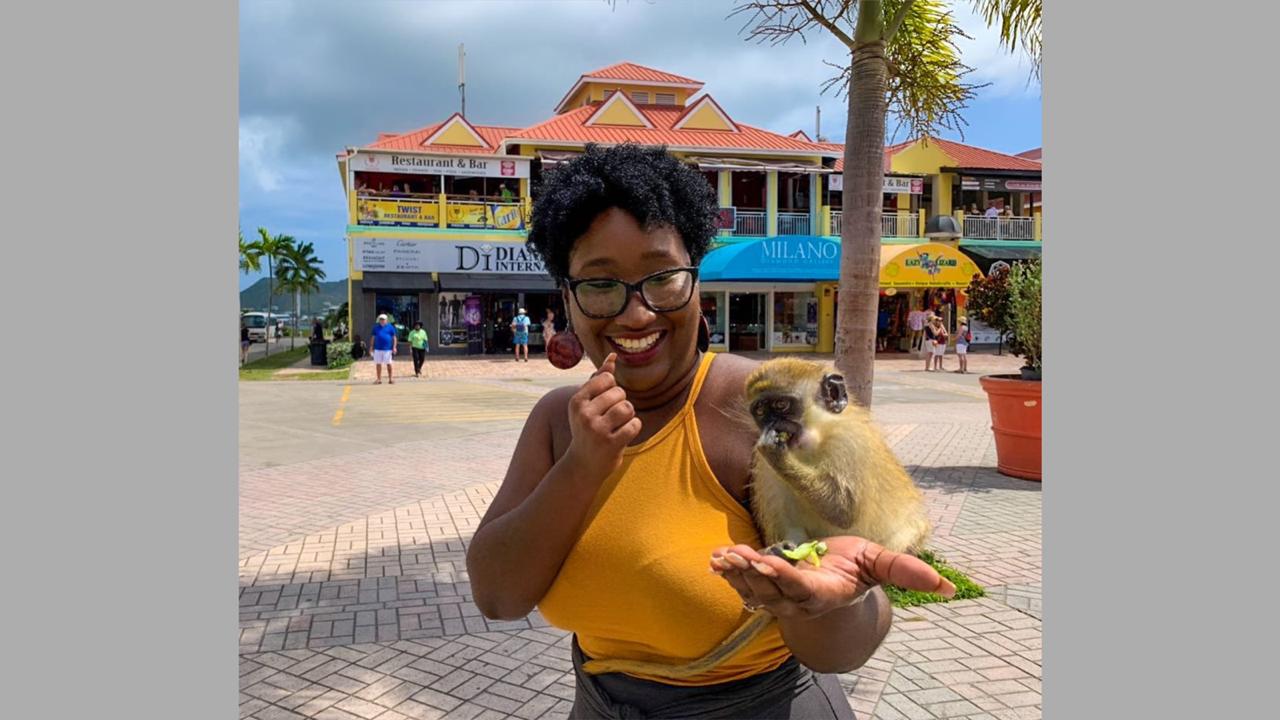 Every year, thousands of tourists journey to St Kitts and Nevis for the express purpose of observing and interacting with the population of green vervet monkeys at home there.

These little critters are now prominent fixtures within the Federations' environmental and cultural landscape and are arguably as iconic as the country’s black sand beaches and historic fortresses.

On any given day, you can see natives walking around Port Zante with their pet monkeys, who have been trained to engage curious tourist’s fresh off the ships.

It was there that we met Darian.

With a baby monkey perched on his shoulder, Darian told Loop Caribbean that he has been in the monkey business for five years.

He said, “I got my first pet monkey when I was a boy so I have always known how to handle them. I grow my monkeys from babies, they are like my children, mischievous like children too. Everyone has a different personality, this one here doesn’t like clothes, so for him it’s a diaper alone.”

He said the monkeys are given the royal treatment by curious tourists who pay as much as US$10 to pet and take pictures with them.

Monkey-handling at Port Zante is Darian's primary source of income, but he said that they're as cunning as they are cute and their insatiable appetite pose a serious threat to the agriculture sector.

Monkeys in the wild have been known to devour watermelons, mangoes, cabbage, pumpkins, squash and cucumbers. They even up-root and devour sweet potatoes and cassava crops.

Officials say so indiscriminate are they in their quest to fill their bottomless tummies, they often harvest and consume fields of hot peppers, seemingly unaffected by its sting.

These crafty pests, we were told, destroy scarecrows and befriend the dogs meant to scare them away.

Frustrated by thwarted attempts to protect their crops from the ravenous primates, farmers have called on the government for help.

Director of Agriculture Melvin James told Loop Caribbean the twin-island state loses an estimated 100 metric tons of food every year, with farmers reporting hundreds of thousands of dollars in losses after their crops were destroyed by monkeys.

The Ministry of Agriculture recently launched a Monkey Task Force meant to address the growing population and find ways to mitigate the damage they cause.

Despite their mischief-making, green vervet monkeys are integral to the St Kitts and Nevis tourism product.

Director James said balancing the country’s tourism which accounts for a large fraction of the GDP, with the need to feed the nations human population presents a curious conundrum.

He said: “The human-animal conflict is not unique to St Kitts and Nevis, but we are going to find a way for both parties to co-exist. The monkeys should not be presented as all bad. They are an important part of the tourism product and are used for bio-medical research which makes the rounds worldwide.”

This sentiment was echoed by our friend Darian the monkey-handler.

He said: “There are times work real hard to get, so the only money I make is on the Port with my monkeys. People complain about them, yes they miserable and they eat plenty but they have to study people like me too. The monkeys aren’t all bad, you know how much tourists come here just to do this? The monkey farm doing international research too, so it’s plenty give and take. I say live and let live.”

The St Kitts and Nevis Bio Medical Research lab, known to locals as the monkey farm, has been in existence since 1982.

The property spans just about nine acres of what used to be a sugar estate, and houses approximately 1300 monkeys.

Monkeys are not native to St Kitts and Nevis.

Local historians say they were brought to the Federation as exotic pets by early settlers in the 17th Century.

They also believe that the monkeys ventured away from their safe haven in the mountains, and made their way into residential areas out of necessity, when trees were destroyed by hurricanes.

The collapse of the sugar industry, it is often said, is another great contributor to their change in location and diet.

Montserrat government to work with farmers to boost agriculture sector

St Kitts Music Festival: Bigger and better than ever