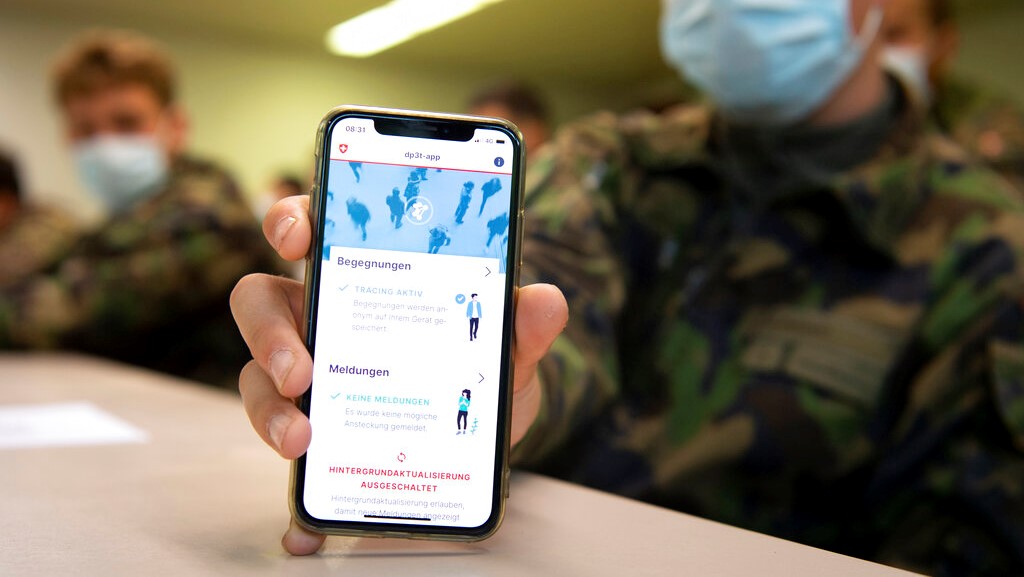 A soldier of the Swiss army wearing a protective face mask holds a smartphone with an app using Decentralized Privacy-Preserving Proximity Tracing (DP-3T) during a test with 100 soldiers in the military compound of Chamblon near Yverdon-les-Bains, Switzerland, Thursday, April 30, 2020. (Laurent Gillieron/Keystone via AP)

As governments race to develop mobile tracing apps to help contain infections, attention is turning to how officials will ensure users' privacy. The debate is especially urgent in Europe, which has been one of the hardest-hit regions in the world, with nearly 140,000 people killed by COVID-19.

The use of monitoring technology, however, may evoke bitter memories of massive surveillance by totalitarian authorities in much of the continent.

Here is a look at the issues.

European authorities, under pressure to ease lockdown restrictions in place for months in some countries, want to make sure infections don't rise once confinements end. One method is to trace who infected people come into contact with and inform them of potential exposure so they can self-isolate. Traditional methods involving in-person interviews of patients are time consuming and labour intensive, so countries want an automated solution in the form of smartphone contact tracing apps. But there are fears that new tech tracking tools are a gateway to expanded surveillance.

Intrusive digital tools employed by Asian governments that successfully contained their virus outbreaks won't withstand scrutiny in Europe. Residents of the EU cherish their privacy rights so compulsory apps, like South Korea's, which alerts authorities if users leave their home, or location tracking wristbands, like those used by Hong Kong, just won't fly.

The contact-tracing solution gaining the most attention involves using low energy Bluetooth signals on mobile phones to anonymously track users who come into extended contact with each other. Officials in western democracies say the apps must be voluntary.

The battle in Europe has centred on competing systems for Bluetooth apps. One German-led project, Pan-European Privacy-Preserving Proximity Tracing, or PEPP-PT, which received early backing from 130 researchers, involves data uploaded to a central server. However, some academics grew concerned about the project's risks and threw their support behind a competing Swiss-led project, Decentralised Privacy-Preserving Proximity Tracing, or DP3T.

Privacy advocates support a decentralised system because anonymous data is kept only on devices. Some governments are backing the centralised model because it could provide more data to aid decision-making, but nearly 600 scientists from more than two dozen countries have signed an open letter warning this could, "via mission creep, result in systems which would allow unprecedented surveillance of society at large."

Apple and Google waded into the fray by backing the decentralised approach as they unveiled a joint effort to develop virus-fighting digital tools. The tech giants are releasing a software interface so public health agencies can integrate their apps with iPhone and Android operating systems, and plan to release their own apps later.

The EU's executive Commission warned that a fragmented approach to tracing apps hurt the fight against the virus and called for coordination as it unveiled a digital "toolbox" for member countries to build their apps with.

The approach Europe chooses will have wider implications beyond the practical level of developing tracing apps that work across borders, including the many found in the EU.

"How we do this, what safeguards we put in, what fundamental rights we look very carefully at," will influence other places, said Michael Veale, a lecture in digital rights at University College London who's working on the DP3T project. "Countries do look to Europe and campaigners look to Europe," and will expect the continent to take an approach that preserves privacy, he said.

European countries have started embracing the decentralised approach, including Austria, Estonia, Switzerland, and Ireland. Germany and Italy are also adopting it, changing tack after initially planning to use the centralised model.

But there are notable exceptions, raising the risk different apps won't be able to talk to each other when users cross Europe's borders.

EU member France wants its own centralised system but is in a standoff with Apple over a technical hurdle that prevents its system from being used with iOS. The government's digital minister wants it ready for testing in "real conditions" by May 11 but a legislative debate on the app was delayed after scientists and researchers warned of surveillance risks.

Some non EU-members are going their own way. Norway rolled out one of the earliest - and most invasive - apps, Smittestopp, which uses both GPS and Bluetooth to collect data and uploads it to central servers every hour.

Britain rejected the system Apple and Google are developing because it would take too long, said Matthew Gould, CEO of the National Health Service's digital unit overseeing its development. The British app is weeks away from being "technically ready" for deployment, he told a Parliamentary committee.

Later versions of the app would let users upload an anonymised list of people they've been in contact with and location data, to help draw a "social graph" of how the virus spreads through contact, Gould said.

Those comments set off alarm bells among British scientists and researchers, who warned last week in an open letter against going too far by creating a data collection tool. "With access to the social graph, a bad actor (state, private sector, or hacker) could spy on citizens' real-world activities," they wrote.

Despite announcing plans to back European initiatives or develop its own app, Spain's intricate plan for rolling back one of the world's strictest confinements doesn't include a tracing app at all. The health minister said the country will use apps when they are ready but only if they "provide value added" and not simply because other countries are using them.

Economic figures show grim toll in Europe and US from virus

Coronavirus: Tokyo Olympics 'will be scrapped' if 2021 is unfeasible