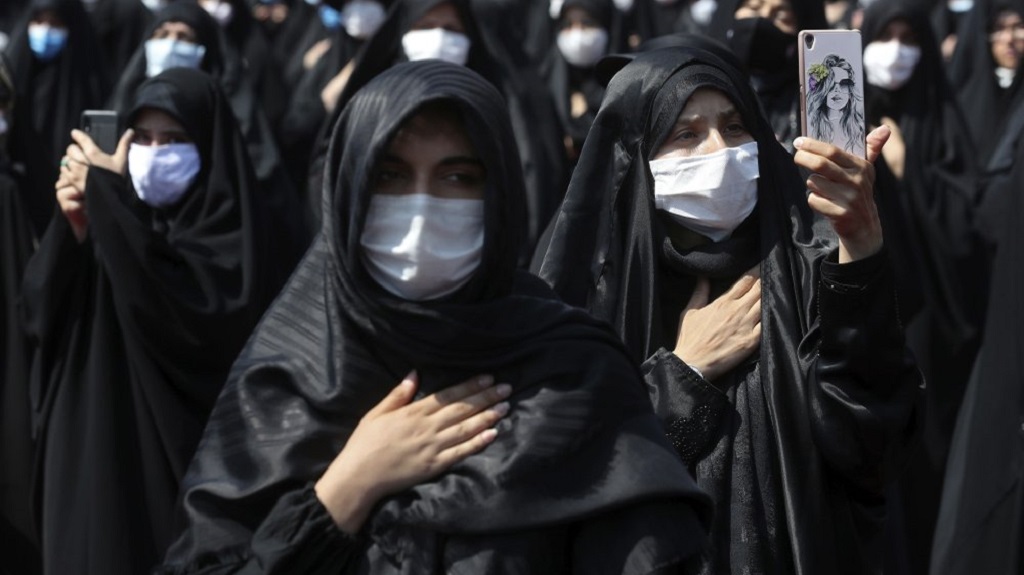 FILE - In this Sunday, Aug. 30, 2020 file photo, people wearing protective face masks to help prevent spread of the coronavirus mourn during an annual ceremony commemorating Ashoura in Tehran, Iran. The confirmed death toll from the coronavirus has gone over 50,000 in the Middle East as the pandemic continues. That's according to a count Thursday, Sept. 3, 2020, from The Associated Press, based on official numbers offered by health authorities across the region. (AP Photo/Ebrahim Noroozi, File)

The confirmed death toll from the coronavirus went over 50,000 in the Middle East on Thursday as the pandemic continues.

That's according to a count from The Associated Press, based on official numbers offered by health authorities across the region.

Those numbers still may be an undercount, though, as testing in war-torn nations like Libya and Yemen remains extremely limited. The top UN official for Libya on Wednesday warned the coronavirus pandemic in the war-ravaged country appears to be "spiralling out of control." Yemen's Houthi rebels, who hold parts of the nation, have refused to release virus statistics.

The hardest-hit nation remains Iran, which saw the region's first major outbreak. Over 21,900 people have died there from the virus, with over 380,000 confirmed cases and 328,000 recoveries.

Israel just recorded a record-high 3,000 new cases in a day as the country's coronavirus czar is set to submit a list of more detailed recommended restrictions where infection rates have been highest. Israel earned praise for its early handling of the virus crisis and imposing tight movement restrictions.

But since reopening the economy in May, new cases have spiked to record levels and the government has been blamed for mismanaging the resurgence.

Pakistan's numbers have continued to decline — befuddling expectations in mid-June when even the authorities were anticipating a massive increase in cases.

In Afghanistan, the government also has opened up its recreational facilities and most businesses. But experts fear the real numbers are likely far higher than officially reported.

The United Arab Emirates, which has embarked on a mass testing campaign, saw its highest daily confirmed new case count in over three months. That came as schools have reopened in the country and Dubai has offered itself as a tourist destination.

The Rock, his family test positive for the coronavirus

Europe is going back to school despite recent virus surge