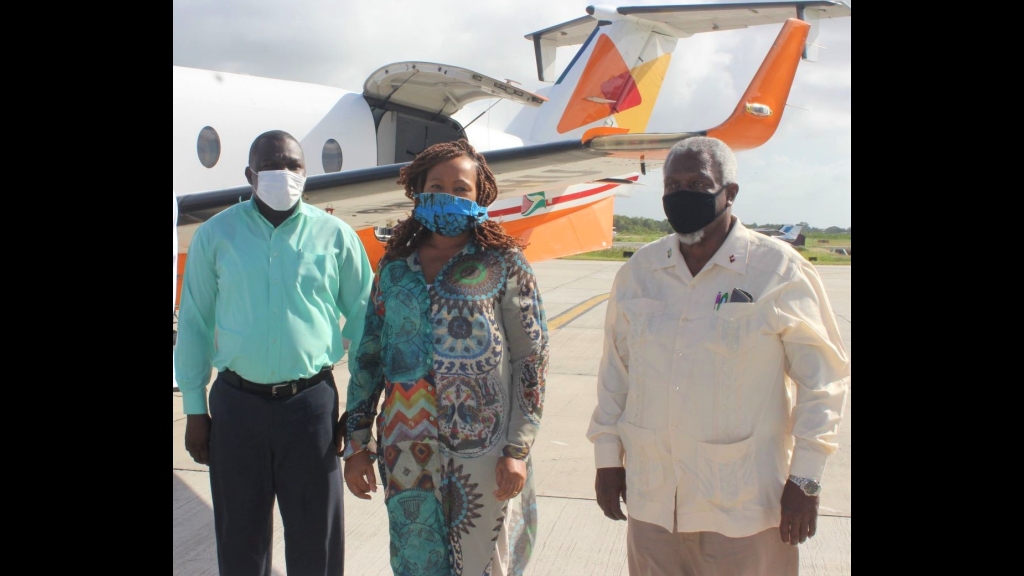 The CARICOM team (from left to right) Sylvester King, Deputy Supervisor of Elections of St. Vincent and the Grenadines, Cynthia Barrow-Giles, Senior Lecturer in the Department of Government at the University of the West Indies (UWI) and John Jarvis, Commissioner of the Antigua and Barbuda Electoral Commission. Photo: CARICOM

Guyana’s March 2 Regional and General Election was valid despite there being some deficiencies.

This was the opinion was given by the three member Caribbean Community (CARICOM) Observer Team in their report on the national recount, which was handed over to the Guyana Elections Commission (GECOM) today.

The hand over did not take place in person.

“Overall, while we acknowledge that there were some defects in the recount of the March 2, 2020 General and Regional Elections in Guyana, the team did not witness anything which would render the recount, and by extension, the casting of the ballot on March 2, so grievously deficient procedurally or technically, (despite some irregularities), or sufficiently deficient to have thwarted the will of the people and consequently preventing the results and its declaration by GECOM from reflecting the will of voters and the actual count of the vote was indeed transparent,” the CARICOM team said.

CARICOM’s opinion is vastly different from the one given by Chief Elections Officer Keith Lowenfield in his report. Lowenfield said the election was not fair and credible since there were over 4,000 instances of electoral fraud.

The incumbent A Partnership for National Unity + Alliance For Change (APNU+AFC) coalition received some heavy criticism from the team for the behaviour of party agents.

The team noted as “bizarre” requests and queries from the coalition of serial numbers of people included on the Official List of Electors.

“The Team view much of this exercise as a fishing expedition designed to gather data for a possible election petition and which resulted in considerable time being wasted during the recount.”

The team has made several recommendations, including a revamp of GECOM to ensure there decision taken by the Commission is apolitical.

The team was led by Cynthia Barrow-Giles, Senior Lecturer in the Department of Government at the University of the West Indies (UWI). John Jarvis, Commissioner of the Antigua and Barbuda Electoral Commission and Sylvester King, Deputy Supervisor of Elections of St. Vincent and the Grenadines were also on the team.