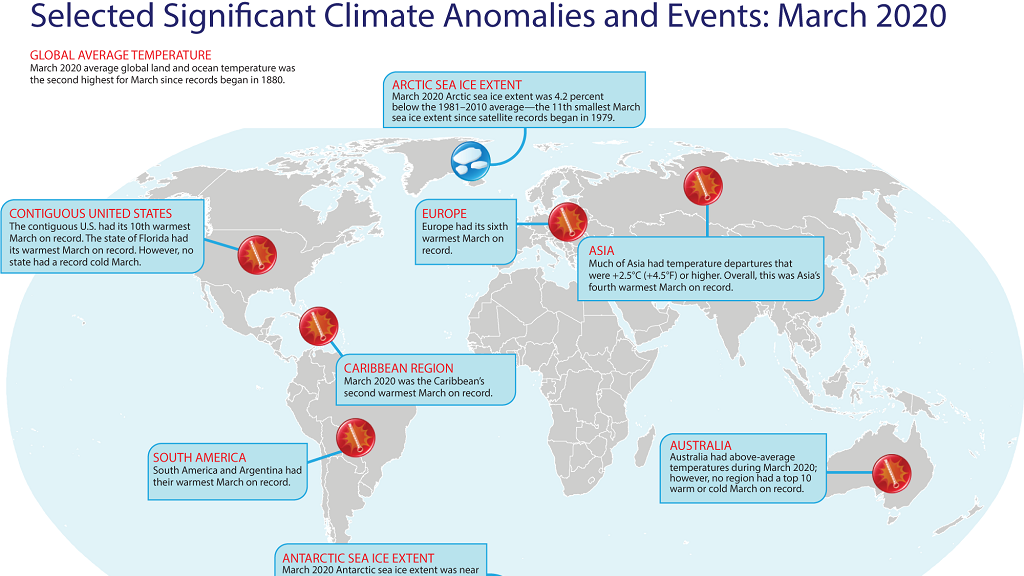 Photo courtesy the US National Oceanic and Atmospheric Administration (NOAA).

The Caribbean was one of several regions which recorded the second hottest temperatures in March in the history of the US Oceanic and Atmospheric Administration's (NOAA) records.

In a statement, the NOAA said the year 2020 is very likely to rank among the five warmest years on record, with January and February 2020 also registering as the second hottest ever months on record globally.

The US agency said South America and the Caribbean region had their third warmest year-to-date on record, according to NOAA National Centers for Environmental Information.

Climate by the numbers

The average global land and ocean-surface temperature for March was 2.09 degrees F (1.16 degrees C) above the 20th-century average and the second-highest March temperature on record after 2016.

The 10 warmest Marches have all occurred since 1990. March 2020 was also the 44th consecutive March and the 423rd consecutive month with temperatures — at least nominally — above the 20th-century average.

Year to date: January through March

The global land and ocean surface temperature of 2.07 degrees F (1.15 degrees C), above the 20-century average, making it the second-warmest January-through-March period in the 141-year record, behind 2016.

The year to date logged in as second-warmest for both the Northern and Southern hemispheres, while Europe and Asia had their warmest YTD  ever recorded.

A map of the world noting some of the most significant weather and climate events that occurred during March 2020. For more details, see the bullets below and at http://bit.ly/Global202003.

Some of the effects of global warming include more catastrophic storms as has been seen with the passage of Category 5 hurricanes Irma and Maria in 2017.

Meteorologists at AccuWeather have predicted approximately seven to nine hurricanes in for the 2020 Atlantic hurricane season.

For more information on the report see here: https://www.ncdc.noaa.gov/sotc/global/202003